The gifts of the tabernacle

Sometimes vacations include unexpected learning opportunities. I was able to have such an experience a few months ago. I learned. I felt in awe. I experienced an appreciation for the gift of Jesus. I started writing this around Christmas. I put it off...found other things to do. I then heard some things on the radio that enhanced upon the thoughts I'd been thinking. So I share, in a new year. A time we usually learn to refocus and make promises to ourselves to do better.

We celebrate the birth of Jesus on Christmas. Jesus was born with a purpose of allowing us to be back in communion with God. On our own. Without a bunch of ritual, sacrifice or someone else (priest) bringing our concerns to God. We have the ability to pray and experience the Holy Spirit because that little baby came to earth and into our humanity.

The trip was to Florida to help a friend relocate for the winter. We drove past a sign on the way to Tarpon Springs that mentioned Tabernacle in the Wilderness. We did some web searching and scheduled a tour. There were only 3 of us, but we received a tour that would have easily been expected for a group much larger. I could do a review of the site itself, but that really isn't the intent of this post. The post is more of a visual and reminder of the purpose of the tabernacle and how it plays a bigger part of the Bible and making it more real for me.

We entered a rather unassuming (from the outside) building. The actual area of the tabernacle replica was (at first glance) similar to the inside of a large gym. However, when looked at closer and some was explained, we noticed the floor was painted to look like a desert. The far wall was painted to simulate mountains. The attention to detail was interesting and informative.

The majority of what is written in the Bible about the tabernacle (tent of meeting) is in the book of Exodus. The Israelites (people of God) left Egypt. God served as their protection and what we could consider GPS by providing a cloud by day and fire by night that let the Israelites know when they should move or stay and led them where God wanted them to be.

Throughout this time, even though the Israelites were able to see proof of the Lord, even they struggled with following the directions and laws the Lord made. They made idols. They rebelled. They wandered in the desert because even then they lacked faith in what God told them. 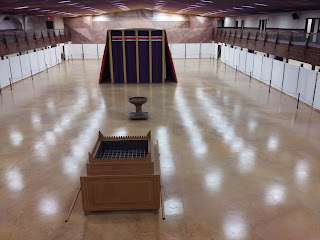 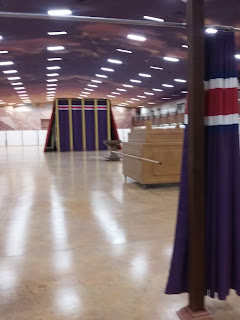 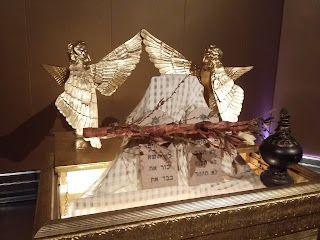 (The ark of the covenant contained the 10 commandments, the budding staff of Aaron, and a container of manna that God provided during the Israelites years in the desert)

Hundreds of years later, Solomon was tasked with the job of building a permanent temple. Even in this temple and those that came after due to destruction, there was a curtain separating people from the ability of communicating directly with God. It was still the job of the priests.

1 Kings 6:37 (NIV)
The foundation of the temple of the Lord was laid in the fourth year, in the month of Ziv. 38 In the eleventh year in the month of Bul, the eighth month, the temple was finished in all its details according to its specifications. He had spent seven years building it.

Many years later, Jesus referred to himself as a temple:

19 Jesus answered them, “Destroy this temple, and I will raise it again in three days.”

20 They replied, “It has taken forty-six years to build this temple, and you are going to raise it in three days?” 21 But the temple he had spoken of was his body. 22 After he was raised from the dead, his disciples recalled what he had said. Then they believed the scripture and the words that Jesus had spoken.

When Jesus was crucified and gave up his spirit to death, the temple curtain was torn in two. It was no longer required that only the priests could talk to God for us. We have been given the gift of the Holy Spirit and the ability to talk to God directly on our own.

The gifts continue as we look forward to Easter and celebrating a risen King that led His people through years of wilderness, tore the temple curtain and enables us to present our thanks and needs to a God that knew we needed a Savior because we would continue to try to save ourselves.
Posted by Karen on Tuesday, January 02, 2018

Karen
Realizing that life is an uphill battle, but worth the fight. Grateful that I am never alone or forgotten. Neither are you.

Verse of the Day - BibleGateway.com

STAND UP for mental health!

Shop At Home $ back program

Xerox - Let's Say Thanks - Send a free postcard to a soldier