John 15:5-6 (NIV) 5"I am the vine; you are the branches. If a man remains in me and I in him, he will bear much fruit; apart from me you can do nothing. 6If anyone does not remain in me, he is like a branch that is thrown away and withers; such branches are picked up, thrown into the fire and burned.

We worked in our yard recently. This is somewhat unusual as our yard is big and lots of things grow and live in it. Unless our yard has been mowed recently, it is probably the yard that bugs neighbors and people who really love yard work. I rarely appreciate more than the entrance way to our front door. I get busy, have to much to do....the yard just doesn't always seem at the top of the list. I guess it would be safe to say that I always wanted a garden....until I got one....and realized how much work it is.

When I actually took a walk around the yard with trimmers to cut down the plants that threaten to take over more than their fair share of space, I really looked. I don't know why, but I always feel bad cutting stuff off. Even if it is weeds. Some weeds really are quite pretty. Some are horribly ugly with some nice features like the prickly plant that gets bigger and bigger, but has some neat purple flowers that open eventually.

My goal for this yard excursion was to trim the vines that grow up through the cracks of the deck. They are actually rather nice looking, but they grow out of control. They grab onto the rails of the deck and work their way up. This time I caught them early enough that their grip had not tightened to much.

Upon further inspection of some of the trees at the backside of the house, I noticed that there were similar vines in the tree. I started pulling. Many of the vines required me pulling back with all my weight....and I still could barely move them. I looked closer and was amazed to see the detail of curves and grip and the toughness of the vine. One vine would have many offshoots and had wound itself around the branches of the tree. 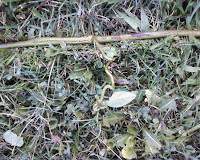 I was reminded of the verse of the vine and the branches in the Bible. I debated how I was going to write this so it tied together because I was focusing on the vine being in the tree...instead of the vine. I started reading up some on vines. Most don't like shade, they want the sun. They grow upward and outward. Some spread very quickly. They are STRONG! (as I found out when I wrestled).

Jesus wants to be our vine, our support in our faith. We doesn't want us to stay in the shadows and darkness. He wants us to keep growing toward the light of the Son. As branches and offshoots, we are supposed to stay connected to the vine to keep growing. We need to be careful what we're clinging to and wrapping ourselves around.

Tonight, was the rest of my lesson. I had successfully wrestled and cut vines. I left them laying in the yard and the hot sun. They were removed from the source. Instead of being green and leafy, they had dried and died. 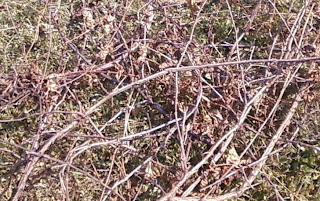 As an offshoot of the vine, I've removed myself many times. I've loosened my grip. I don't pray as much. I don't read the Bible as much. I don't take time for devotions/quiet time. I start to wither. If anyone wrestled with me, I'd pull away easily.

How about you? Are you a strong and healthy offshoot branch? or Are you feeling a little withered and in need of some help from THE Master Gardener?

Karen
Realizing that life is an uphill battle, but worth the fight. Grateful that I am never alone or forgotten. Neither are you.

Verse of the Day - BibleGateway.com

STAND UP for mental health!

Shop At Home $ back program

Xerox - Let's Say Thanks - Send a free postcard to a soldier